So the first thing to be ticked off the list for the 40 Project was to eat homemade faggots from a Black Country butchers. Admittedly, I never really ate them as a child – My only knowledge of them was seeing the adverts for Brain’s Faggots on TV. It wasn’t even the thought of what was in them that put me off, but if the only version I knew of were mass-produced and/or frozen, I’m pretty sure they’re weren’t the gourmet delight that people depicted them to be. Sure, I remember seeing Diana Rigg on a talk show once mention how when she was appearing in a play, they used to have “proper homemade butchers faggots” and not only were they cheap, but they were actually delicious and wholesome – Not like the frozen gunk you get now.

Fast forward a few years and I’m working in a kitchen in Birmingham City Centre and we recruit a new chef de partie – Woody. Now, Woody had the thickest Black Country accent I’d ever heard and he often used to talk about “fagguts an’ pays”. I didn’t have a bloody clue what he was on about but it took a while until I had to get him to explain to me how it’s quite a Black Country thing to have foggots and mushy peas – With lashings of vinegar. Still, never got to try one… So it took the opening of Pure Bar and Kitchen in Birmingham – The first bar to be opened by Purity Ales and the food served there was in consultation with Andreas Antona from Simpsons – Sorry, I should address them by their full title: Michelin-Starred Simpsons restaurant for me to see faggots on the food menu for a mainstream bar. I must confess, I’ve started to get into craft ales and I’d seen mutterings about Pure Bar and Kitchen on Twitter, so I was curious to see what it was like; Well, I could go on about the post-industrial looking interior, or the really fantastic choice of ales, or even the fact that they serve their own homemade pickled eggs and pork scratchings which are served in a half pint glass as bar snacks. But the reason I’m on about Pure Bar and Kitchen? The fact that when they first opened, one of the small dishes they had was a home-made faggot with mushy peas and onion gravy. And yunno what? It was seriously good: The faggot may have been quite meaty rather than offaly, the onion gravy may have had a touch of craft ale added to it, but when you got the trifecta of faggot, peas and gravy in one mouthful – It was just sensational. Seriously, them faggots were one of the best things on the menu and not only was it dark day when they took it off the menu, I’m pretty sure some angels died as a result.

Although I’m still hopeful that faggots will return on the menu at Pure Bar and Kitchen soon, it was the faggots at Pure Bar and Kitchen that got me thinking of this for my 40 Project: It got me thinking of Woody and seeing Diana Rigg on TV all those years ago and well, if I’m going to try faggots, then I should get them from a butchers in the Black Country that have been making them for centuries. Once that was decided, it was simply a matter of where I should buy them from… The place I really wanted to go to – The Cook Shop on Old Hill sadly closed late last year so I just missed them. So it was a case of asking Paul Fulford, restaurant critic and columnist for the Birmingham Post if he knew of anywhere and he very kindly put the message out to his followers: First up was a suggestion of Don Guest in Halesowen (along with the suggestion to try the black pepper sausages). It was certainly Black Country enough in that it was in Halesowen and some quick research showed that it was easily accessible by public transport. Next up was Bowketts in Oldbury which may not strictly be Black Country, but they looked professional enough with their sausages and well, they did make their own faggots. Finally, there was Broadbents in Bilston which boasted of selling 2 million faggots in the past 6 years. You can’t much argue with that.

To be honest, I only needed to try one of the places suggested but for some reason, I tried buying faggots from as many places as possible as if doing a taste comparison. Of course, a lot of this was made possible by the fact that I was joined by my good pal The Foodist who very graciously drove me to all the different butchers (and in the process of doing so, got us taste-testing pork pies, too). But I do have some comments about the places we visited: Don Guest – Probably my favourite butchers of all we visited. I loved how it was an old-fashioned butchers in the middle of a row of houses that opens stupidly early (6am) and closes mid-afternoon. Their window display actually invited you in and by the time we got there mid-morning, they had already sold out of the black pepper sausages. What’s more, all their food is homemade so the faggots were from a recipe over a century old and they didn’t pre-cook the liver before making the faggots. There may have been a slight raising of the eyebrow when they said that they didn’t use pig’s cawl to wrap the faggots, but these were by far the best of all the faggots I bought – The liver wasn’t overcooked and the bits of bacon really added to the overall taste. There wasn’t any overpowering smell of offal and well, these were a pleasure to eat. In fact, everything I bought from Don Guest was very tasty and I am very envious of people in Halesowen whom can say that Don Guest is their local butchers. 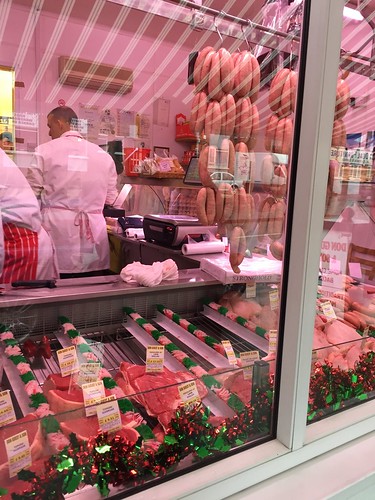 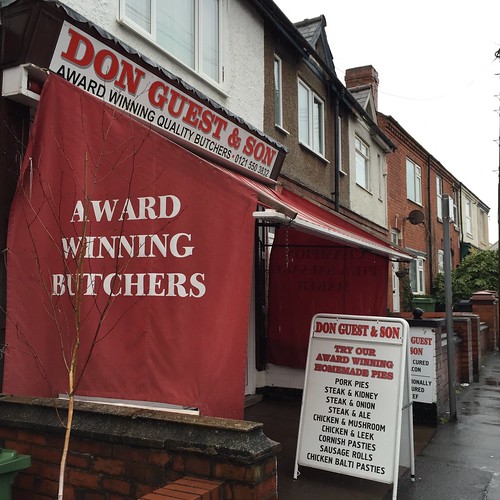 So there you go, I can honestly say that not only did I venture into the Black Country (We had to type in a WV postcode into the Sat Nav at one point!), but I got to try several homemade faggots from a Black Country butchers. And yunno what? They were pretty good. First item ticked off the list! 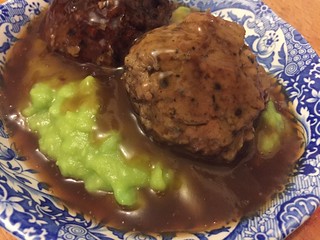 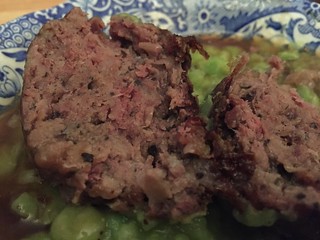