There was a bit (well, a long) gap between completing things for my Year 40 Project as I was not only busy with work (which involved an office relocation) or Chinese New Year, but also because I knew that with my planned trips this year, I would be able to tick a few items off the list in one fell swoop. And so it came to be that I didn’t do anything until the end of March where I had booked a few days off leading up to Easter and planned a short trip to Lyon (more of that in another post), but in our planning stage, I was a bit worried that spending a week there was too long, so we cut it to a few days instead. This of course meant we had a couple of days free and YKL (being the genius that she is), suggested a quick cheeky overnight stay in Whitstable where not only could we take advantage of native oysters being available (Is there an “R” in the month? CHECK!), but we could also go to one of our favourite places in the UK, The Sportsman for lunch the following day if we stayed overnight (and it also gave us an opportunity to eat at Wheelers, another iconic restaurant and generally relax and enjoy being in Whitstable). Hotels and trains booked, more people added to join us, it was just a matter of waiting…

Dinner at Wheelers was booked for 19:30 and for one reason or another, we didn’t actually make it to the Harbour until gone 16:00. That, combined with the fact that there wasn’t just bad weather, but strong gales forecasted overnight meant there weren’t many places left open and those that were open were very limited in their choices. Undeterred, we all went for the what we could make from an Oyster Crawl; First place we went too didn’t have any natives left, but we weren’t going to pass up on the opportunity to sit down and have some freshly shucked oysters – And they were delicious. 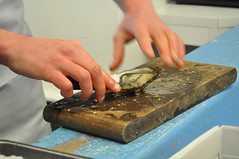 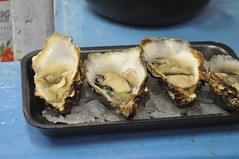 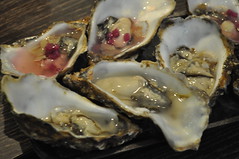 By the time we finished our oysters, there were even fewer places left open and it was still a couple of hours at least until our booking at Wheelers – A fine Whitstable institution. What initially was a cheeky request to ask if we could leave some bottles of wine with them to be chilled (it’s BYO) quickly turned into an impromptu continuation of our Oyster Crawl when we learned they had some native oysters in and were willing to shuck some for us to eat. Well, the native oysters were just something else – This was my first native oyster in Whitstable, and furthermore, it was at Wheeler’s. It wasn’t just another item ticked off the 40 list, it was a moment to savour. 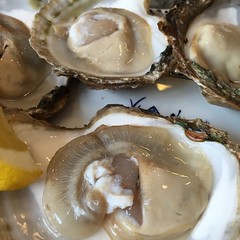 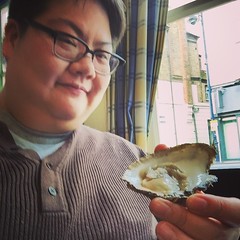 However, a couple of oysters alone are not very filling when you’re pretty much famished and I have a thing about wanting to eat fish and chips at the seaside. Initially I headed to a pub where they looked to be pretty well known for their fish and chips, only to be told they only serve food at lunch times. So upon asking the barman where best to go, he directed me to the Whitstable Fish Bar and warned me that it wasn’t anything special, but the fish and chips there were good. After meeting up with YKL, we headed over to yunno, eat fish and chips before our dinner.. 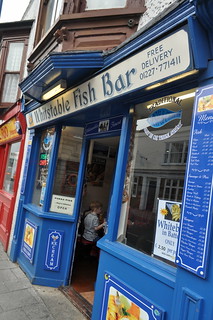 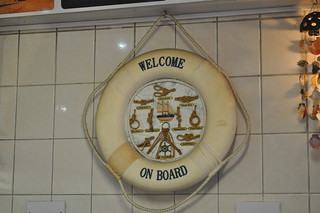 Admittedly, my heart sank a little when I walked in because a quick glance at the menu saw they offered Southern Fried Chicken and Doner Kebabs – The usual fare you could get from any chippy anywhere. However, there wasn’t much in the hot plate so I ordered a fish and chips and was told to sit down as the food was cooked. It was only then I spotted a poster offering freshly battered whitebait and whilst ordering a portion in addition to the fish and chips would be too much, neither YKL nor I really wanted to pass up on the opportunity of whitebait. So, YKL suggested we have just fish and some whitebait – which would be ideal as it’s the chips which are more filling anyway. Order amended, we tried not to kill anyone who got their food first because it smelled so good, but it wasn’t too long before we got our fish and whitebait. 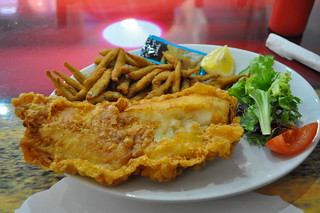 The fish may not have been the freshest I’ve ever eaten – But it was pretty decent. Similarly, the whitebait could probably have been a bit fresher. But the winner was the coating and/or batter – The whitebait were breadcrumbed very well and were delicious, but the most amazing thing was the batter on the fish – It was so crisp that biting into it probably caused a seismic event somewhere in the globe. Truly, one of the best pieces of battered fish I’ve ever eaten. You all know I love Bedders here in Brum, but if I could get the freshness of the fish at Bedders combined with the batter at Whitstable Fish Bar – That would be battered fish nirvana for me. Sure, fish and chips in Whitstable wasn’t on the 40 list, nor was fish and chips at the Seaside, but if you ever find yourself in Whitstable, you should do yourselves a favour and come here for fish and chips. 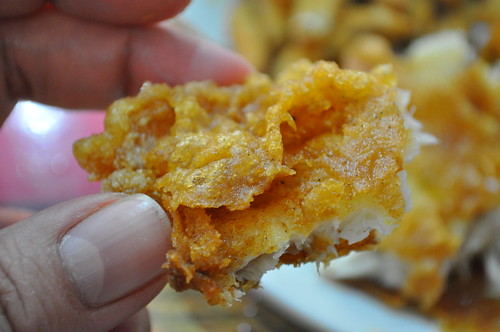 Still having a bit of time before our booking at Wheelers (mercifully for digestion purposes), we decided to look for somewhere to drink. I wasn’t going back to the pub I went to previously mainly because it was something from the TV where all that was needed was the needle to scratch from the record player and for the whole pub to suddenly go quiet as I walked (well, stumbled) through the doors. OK, may be exaggerating a teensy bit, but it wasn’t far off… As luck would have it, the three of us (Q had joined us at this stage) stumbled upon The Black Dog. We (well I) had spotted it on our way to the Harbour earlier in the day and in the past couple of years, I’ve been getting into the craft beer scene, so was well up for a pop inside. 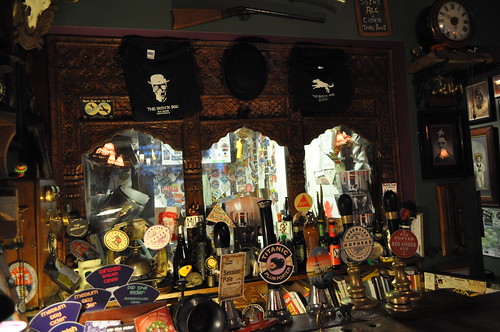 I wasn’t at all disappointed inside with the long high banquette lining either side of the bar. Seriously, they were so high that my feet didn’t touch the ground at all when sat down. They had a few barrels of beers in the background and the room, whilst dimly lit, had walls adorned with interesting – some may say quirky – choices of artwork, but hey! Any place where the door to the only loo is covered by posters and pictures of rock god/guitarist Slash, that’s alright by me.. 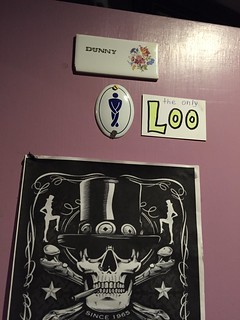 As for the beer? Well, the cellar, although small with only a few barrels of beer, is kept impeccably and the beer we had was not only at the right temperature, but there was an interesting selection on offer. It’s the kind of place where I would have stayed much longer if we didn’t already have plans for dinner at Wheelers. And that deserves a post all by itself…

For now though, I loved my short visit to Whitstable – I wish I could have stayed a bit longer. It’s not just the fact that I was by the seaside (coming from and living in landlocked Birmingham) and I got to eat in some really fantastic places (like Wheeler’s and The Sportsman), but I was genuinely surprised by how nice and friendly everyone in Whitstable was. Of course, it may by the cynical City Girl in me speaking and I’m generally surprised when people respond with anything more than a grunt, but I can honestly say that the people of Whitstable are lovely. More to the point, Whitstable itself is a lovely place with some really nice places to eat and drink, also to see and do and well, let’s not forget the fantastic fresh seafood available there.