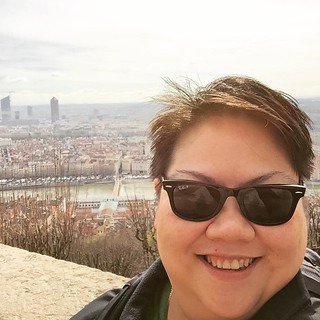 This year has mainly been about my 40 Project.  For those whom aren’t familiar with this concept, it’s essentially a year-long project where during my travels to different locations or restaurants and eat/drink something which is either local to the area, a speciality of the area (which they may or may not be well known for), or eat a signature dish for a restaurant –  All this to mark the fact that I turned 40 this year.  As a result, it’s meant that I’ve been travelling about even more than usual and trying out even more different bars/restaurants/pubs and well, rather than writing one ginormous post about the whole list or dedicating 1 post per item achieved, I thought I would bunch together a whole load at a time to form a series of posts.  I mean, this project has spanned the whole year and given so much has happened, it deserves more than one blanket post.

As I mentioned earlier, a lot of this year was spent travelling – Either to favourite places (Copenhagen) or to newer places (Alaska), but each destination was an opportunity to try something new, or remind myself of how great some things were. One place I’ve always wanted to visit was Lyon – Partly out of my love and respect for the old classic French Cuisine and Lyon was at the centre of a lot of the major changes in gastronomy over the past century as many of the protagonists in these changes (Paul Bocuse, the Troisgros Brothers, Eugenie Brazier) were based in Lyon. The name Bocuse – A man whom has held 3* for 50 years at his L’Auberge du Pont de Collonges restaurant – holds a near god-like status in my mind. Simply put, if there was no Paul Bocuse, there wouldn’t be the top chefs running their own restaurants we see these days. He’s *that* important. 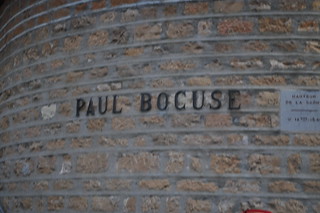 Therefore, it was pretty much a no-brainer that we should eat at L’Auberge du Pont de Collognes – I was seriously fighting back the tears upon arriving at the restaurant and seeing the illuminated Paul Bocuse sign at the top of the building. First tick on the 40 List was getting to eat the Truffle Soup, or (to give it’s proper name) Soupe au Truffles Noires VGE [1]. This was something M. Paul created for the French President years ago and it’s retained its cult status so much so that it’s become one of his signature dishes. A chicken broth laced with plenty of slivers of black truffle in an individual soup terrine with a dome of puff pastry on top. This was the one dish that I’d heard so very much about that it has an almost-revered like status in my life. It was only when I looked at the terrine whilst eating this that I noticed that it was created in 1975 – The very year I was born and it felt very serendipitous that I should be eating that very dish to mark my 40th Birthday year. 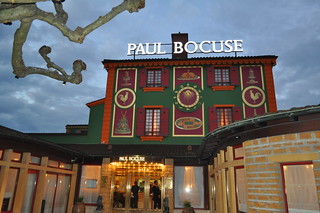 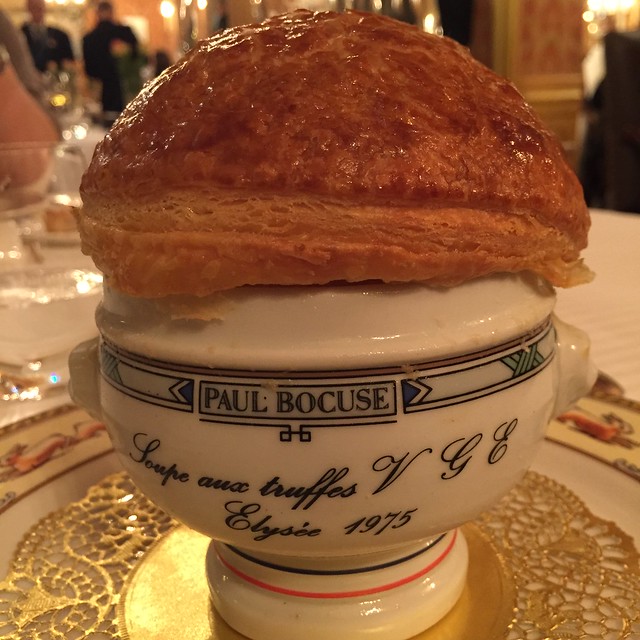 But that wasn’t the only tick on the 40 list from this meal; As I opted for the menu classique, for my mains, I chose fricassée de volaille de Bresse à la crème et aux morilles [2] (Or, breast of Bresse chicken with a morel and cream sauce). It’s guerdon service here so the dish was finished table side with the assured professionalism as you would expect from such an institution.  The dish itself was as delicious as I hoped and by now, I was seriously happy. 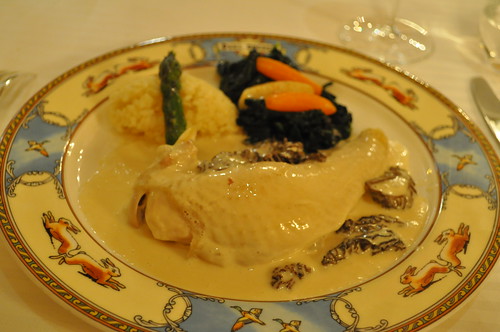 I also got to try YKL’s rouget barbet en écailles de pommes de terre croustillante [3] (red mullet with potato scales) which made up the third tick on the 40 list from that meal alone. I could go on a bit more about my meal at L’Auberge du Pont de Collonges, but that isn’t the purpose of this post, perhaps I’ll revisit it another time. But for now, I’ll say that I’m glad that I’ve experienced it whilst M. Paul is still alive. 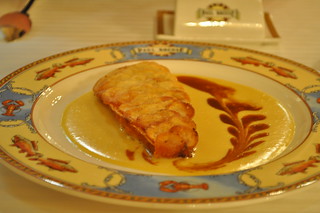 During this trip to Lyon, other ticks to the 40 list included:  eating the famed praline tarts [4] (although I must preferred the Galette Lyonnaise) and pike quenelles [5], I also got to eat Cervelle de Canut [6], another speciality of Lyon at that most Lyon of eating establishments, a Bouchon [7] (in this case, the very brilliant Bouchon des Filles). 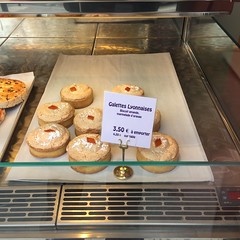 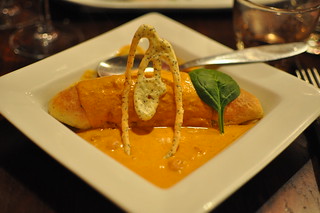 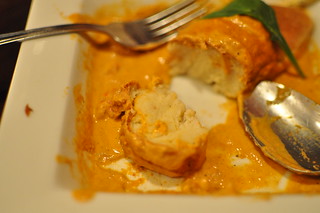 During our many trips to the market hall (or Les Halles de Lyon – Paul Bocuse to give its proper title), we stopped off at (another) celebrated Fromagerie, La Mère Richard and got to eat (and buy) her Saint Marcellin and Saint Félicien cheeses [8]. So good are her cheeses that they are featured in the cheese offerings at Bocuse’s restaurant. One of the great joys of this trip was waking up knowing that I had some St Marcellin cheese, baguette and mini cured meats to eat as breakfast. VERY Happy Days. 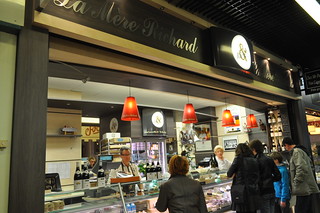 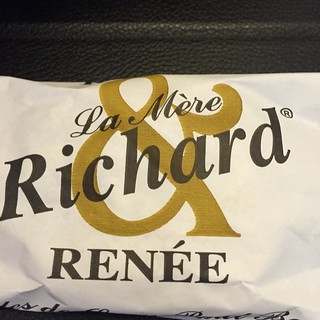 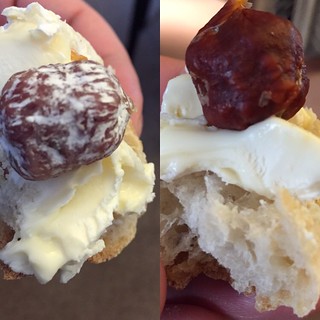 During our meal at the celebrated La Mère Brazier, the artichaut et foie gras dish was one of the best things I have EVER eaten [9]. Seriously, whilst I have been lucky enough to eat dishes that are worthy of up to 13 out of 10, this dish was a 15. It was sublime. Genuinely, I didn’t want this dish to end and well, it firmly established itself onto the menu for my last meal. I could talk about how Matthieu Viannay has managed to reinvent the dish, etc. etc. But honestly, all you need to know is that it was friggin’ awesome. It was also from trying a chocolate at La Mere Brazier just before our dessert course that convinced me that we needed to go to the Bernachon boutique where I got to eat some very pretty looking patisserie in the café (including his signature Le President [10]) along with those sublime Palet d’Or [10]. Again, this could be the most delicious chocolate I’ve EVER eaten – And I like to think that I’ve eaten more than my fair share in my lifetime. If you ever know of anyone whom is going to Lyon, give them money and tell them to go to Bernachon and buy you a box of Palet d’Or to bring back, you can thank me later. 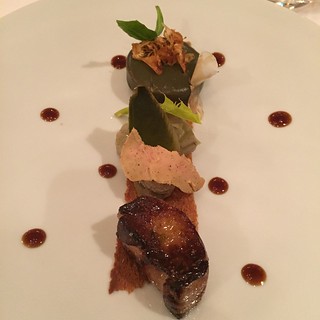 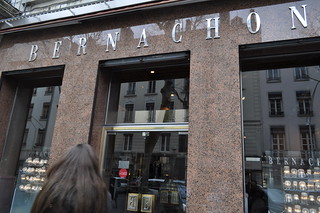 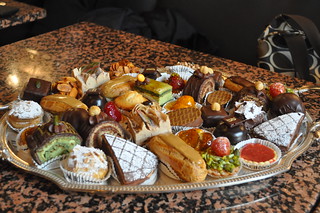 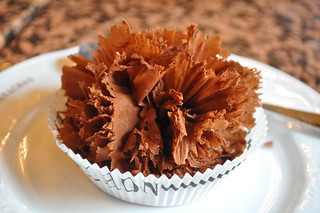 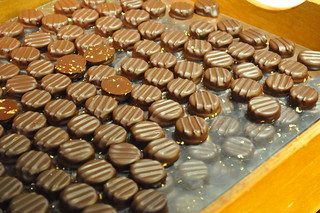 However, the best meal of the trip for me was at the very fabulous Daniel et Denise. Seriously, this could be one of my favourite meals of the entire trip. Not just because I got to add things like eating a Pâté en croute [11] which chef Joseph Viola has won plaudits across France and beyond for (I can see why), or 2 other very Lyonnaise dishes – Saucission de Lyon [12]  (you gotta love a sausage) and of course, a Salade Lyonnaise [13]. I mean, in a world where it’s trendy to eat either a Greek Salad or a Niçoise, the poor Salade Lyonnaise is very much overlooked. However, when it’s done as well as it was here – crisp tender leaves (more Frisée with some dandelion leaves), perfectly dressed (as were ALL our salads on this trip), fat chunky lardons perfectly crisped so that all the fat is rendered out along with a poached egg – This is a thing of beauty to eat. 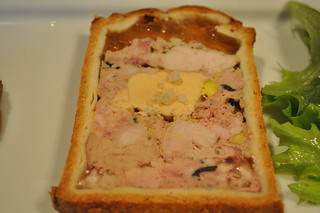 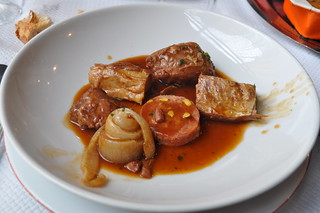 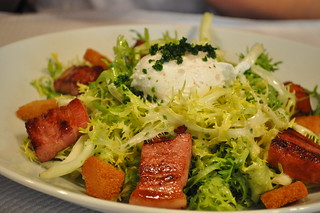 Oh, and I really *must* mention the sides that you get with your meal at D&D – The pommes de terre dorées and the macaroni gratin by themselves are worth making the trip to Lyon for. I mean, nobody told me just *how* delicious (and rich) these would be and I discovered far too late in my meal how delicious they were – And was instantly wondering how/why I didn’t try them earlier in my meal rather than when I was pretty much about to burst. I know that no matter how hard I try, I would never be able to recreate the rich, unctuous textures and flavours of those sides if I tried myself. I mean, forget mac and cheese (as I thought it was), the macaroni gratin wins every time!  Ohh and if you think they’re just fried potatoes, think again.  These are not only fried in BUTTER (we are in Lyon, after all), but they’re not greasy in any way and are perfectly seasoned.  Seriously, I couldn’t stop eating these side dishes.. 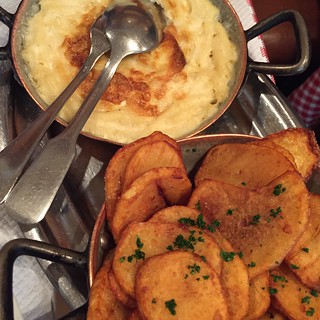 The whole trip to Lyon was brilliant – Lyon is very much still a functional town where the tourist industry hasn’t taken over so you (shock! horror!) see French people actually getting on with their own lives and the markets are where they actually shop every day and not some tourist attraction for someone like myself. In fact, it wasn’t until we went to the Basilique Notre-Dame de Fourvière (one of the main tourist attractions) that I heard an accent other than a French one. I loved the fact that when commenting on how a glass of Orangina was more expensive that a glass of wine, the waiter shrugged his shoulders a bit and said: “C’est La France.” How very true and bless you Lyon, I didn’t just get to add 13 items to my 40 list, but I had a brilliant time in doing so.